The news is learned. Beginning on September 16th, the National Cultural Relics Bureau, Greek Culture and Sports Department hosted, Shaanxi Provincial Cultural Relics Bureau, Qin Shihuang Emperor Museum, Greek National Archaeological Museum’s cooperation development and production, the parallel time and space: in Greece Meacies ” In the official website of the Qin Shihuang Emperor Militter, the Greek National Archaeological Museum official website, the exhibition is used in the exhibition, the three languages ​​of the Greek, and the website is realized in the form of the website.

It is understood that the Greek National Archaeological Museum is the largest museum in Greece, which is located in the center of Athens, Greece, is a grand new classic building. The museum was created in 1866 and is open in 1889, the current exterior appearance is designed by the famous German architect Esters Qipler. The museum exhibition hall is 8,000 square meters, panoramic display from the ancient Greek civilization from the prehistoric period. 11,000 exhibits include art masterpieces made from marble, clay, bronze gold plating and other precious metals. These artworks from Greece, Cyprus, Egypt, Italy and other parts of the world. The audience can enjoy the mysterious Cycladian statue, the treasures of the Tseni royal tomb, the unique real thing in the sculpture hall, the rich collections of the ancient Greek civilization metal cultural relics and the pattern of different types of ceramic artifacts.

There are four “time and space” in this exhibition, of which the most particularly in the Greek National Archaeological Museum, “as if the true existence” virtual exhibition. 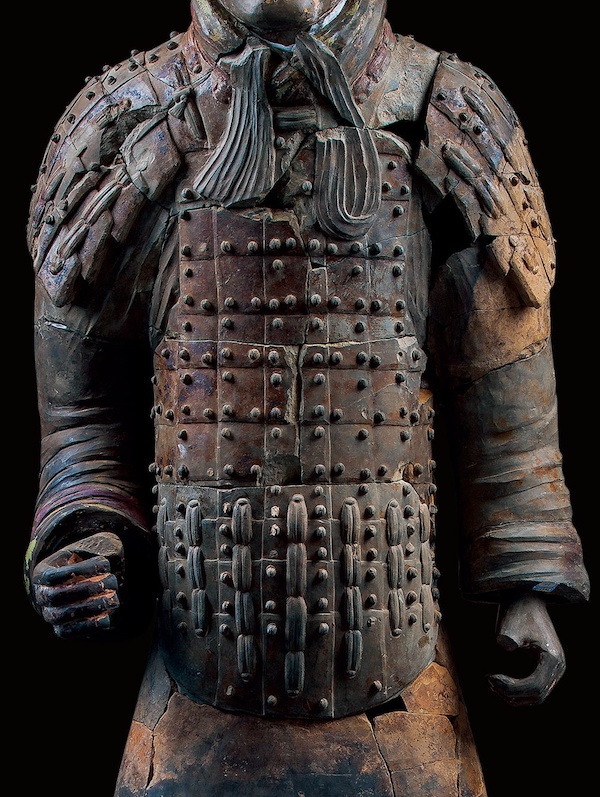 The opposite side of the exhibition hall is standing, the two from different civilized portraits, China is the general commission of Qin Shihuang Emperor Ming, also called the senior military commission, and he is the highest level of more than 2,000 treasury and horses. At present, in the first and second pits, there were 9 pieces of general, and the online exhibition hall was unearthed in 1986. It height is 195cm, the body is high, the body is elegant, and the expression is calm.

This will be a crown on the army, in ancient China is a special decoration of the martial arts. Insert feathers on both sides of the hat, generally used the most beautiful and thick feathers on the body. The ancient books of the Eastern Han Dynasty are an extremely fierce bird. When the birds are fighting, it will always let the other side will die. The ancients borrowed a championship to show his brave – as brave like a bird, until the dead. Under the championship, the face of the generals of the army, the forehead can clearly see three wrinkles, full of vicissitudes.

The crown on the general

Taking this general, this virtual exhibition hall also introduced the different armored armored armor – the armor of the Terracotta Warriors in strict accordance with the Qin Dynasty soldiers. The armor is drawn very delicate, the details of the armor, rivets, and tailts are perfectly reproduced and painted. There are a variety of styles of armor, and the dress is often different as the official position. 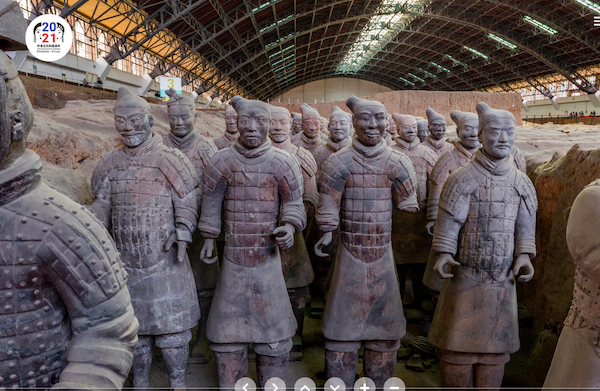 There are also a variety of styles of the martrat of the martrat. Most of the warriraries comb, after the braids, tie the color hair band, which is beautiful and the role of hairdressing. Their hairstyle seems to be similar, but the hair is very different, and the square hairpin can be found. It is very interesting.

The crowns, leather belts and tai clothing in Qin have a variety of pattern patterns, especially if the robes do not wear armor, the patterns on the belt are the most clear and exquisite. The granulous ornament of the belt focuses on the composition, with more contrast colors on the color, so that the pattern is exceptionally protruding.

Wild belts and exquisite patterns above

Greece showed a Croysos youth statue in this virtual exhibition hall, which is the most majestic one in the same kind of statue, made from Paria marble. According to the epitaph of the carved on the base, the statue intends to commemorate the young warrior Croysos, and as an important sign of its grave. This statue is a work of 540 and 515 BC and is considered to be a pioneer in the late stage of the past. 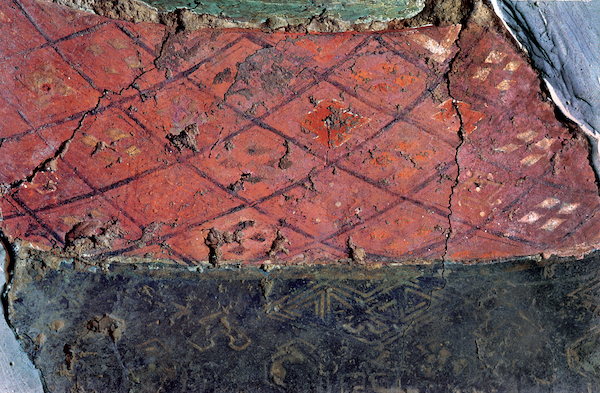 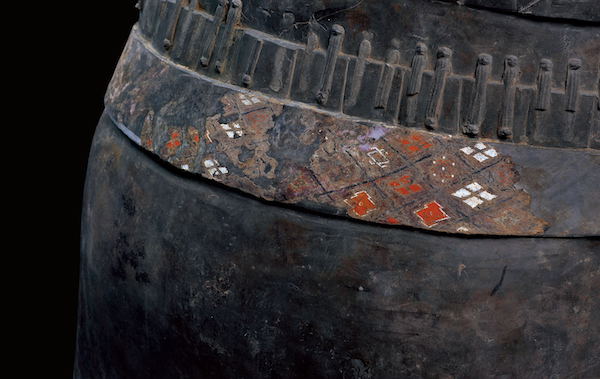 The second time and space of “Parallel Time and Space” exhibition is “Cloud Tour” Qin Bing Hummer Site, click on the instruction icon, the audience can be in the Terracotta Hummer.

Li Qun, director of the National Cultural Relics Bureau, talked about the opening ceremony of this exhibition. Waiting for fruitful results. China National Cultural Relics Bureau will continue to support two-way exchanges in the cultural heritage in China, promote the two ancient civilization multi-interaction. “Another focus of this exhibition is to show the discovery, research and protection of Terracotta Warriors. condition. The third part of this online exhibition is “Protection Lab.”

In the 1970s, when the dust was opened for more than 2,000 years, the treasury and horses have a beautiful color of the archaeors, but they must be between these colors, and they will disappear in front of them because of dehydration, and they will peel off. The fade of the shakhopathy. Limited technology allows the cultural relics of cultural relics in the time.

During decades of research, researchers found that lacquer layers were the key to color protection, and gradually developed effective reinforcement and moisturizing materials and processes. In 2004, the Qinling Museum’s “Qin Lotual Painting Protection Technology Research Project has received the second prize of National Science and Technology Progress. The following year,” The Tao Yequen Cultural Relics Protection State Cultural Relics Bureau key research base (Qin Shihuang Emperings Milly Museum) “was formally established. Today, the residual painting of Qin has been able to save very well, and provides an important basis for the painting research and cultural analysis. Each technological progress is brought new for ancient colors.

The bone is extracted from the bones that burn high, color gray. About 1390, Italian painter Cennino Cennini made a bone with chicken bones, as the bottom of the painting, in China, bone white only used the burial pit in the Qinling area of ​​the Qin Dynasty, and the Hanyang Mingcheng, and Qin Dynasty Xianyang Palace Mural and Afang Palace Mural. In terms of tip, the bones are large, mainly with cinnabar, reflecting skin tones, such as facing facial, hands and feet, etc.; Malchite’s English name comes from Greek Moloche, meaning Jami, a flower with shallow fiss leaves. In nature, it is often symbiotic with Shiqing. As early as the front dynasty, Egyptians used stone green to make eye makeup. In ancient China, the stone green is the most widely used in all green pigments. In the painting of the Terracotta Warriors, the amount of stone green is large, mainly used in large-area costumes such as shirts. 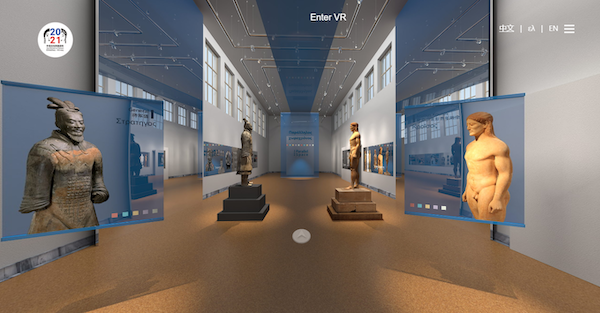 Most of the paints used by Terracotta Warriors are natural minerals, and there are also a small number of synthesis such as Chinese purple, Chinese blue, lead Dan, lead white. Among them, “China Purple” and “Egyptian” “Maya Blue” is considered to be three artificial blue purple pigments that are very important before human beings enter the industrial society. 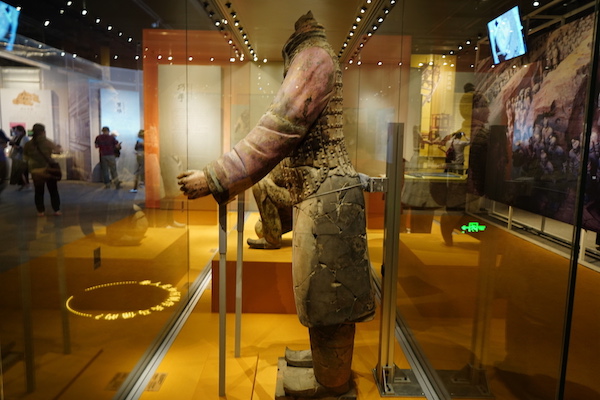 China’s purity is a class of inorganic pigments prepared in ancient China. The main components are copper silicate. This pigment process is complex, the preparation conditions are harsh, and there is a need to mix a variety of substances together, react at a high temperature of around 1000 degrees Celsius, which is difficult to grasp in a modern laboratory. China’s ingredients are very similar to China’s purple, and are often produced in the preparation process. In the same sample, it is easy to find China Purple and China Blue. In more than 2000 years ago, China’s purity is an extremely precious pigment. Only the distinguished royal family and the tomb of the nobility will use purple. In the painting of the terracotta, Chinese purple use is more common, but the amount is not Mainly in the position of cuffs, necklines. China’s blue is often used as the concomitant generation of Chinese purple pigments during the production process, and is not used as a pigment.

In the Capital Museum, I have exhibited a “Chinese Purple” Terracotta Warriors. 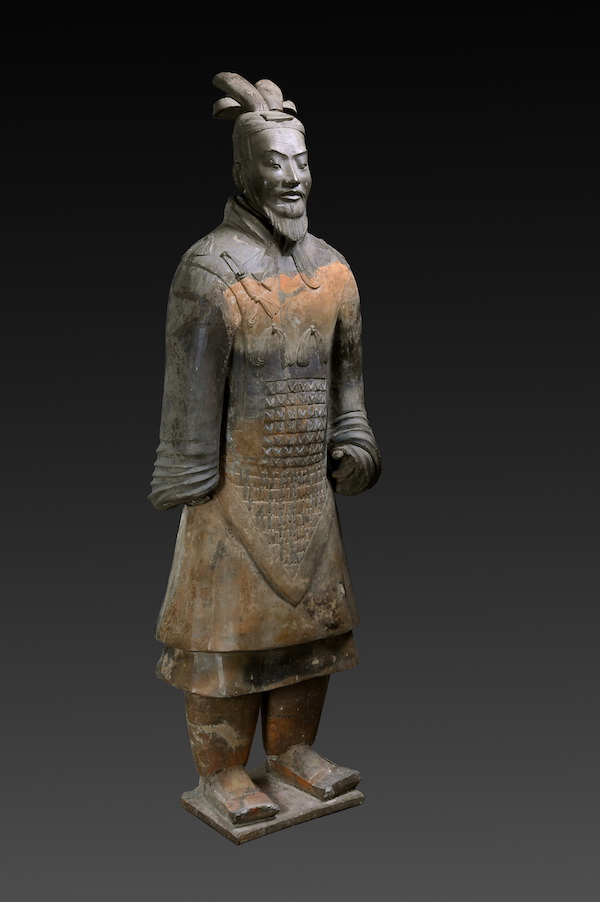 The third archaeological excavation scene of Qin Terracotta Warriors, I also discovered an eyeball for red, and the tires were black, and the third archaeological excavation of the first pit. Found that the treasury colors were endless, not only the color of the clothing There are also many skin tones. Archaeologists have found treasury and horses with black eyes and gray brown eyes. This eye is red, and the 仁 is more complete, and the neck is interrupted from the neck, and the body is separated. It is rumored in the loess. It is amazing. This color chaos is very rich, the eyeball The child is red, and the 仁 is black, such a color match makes this champion. 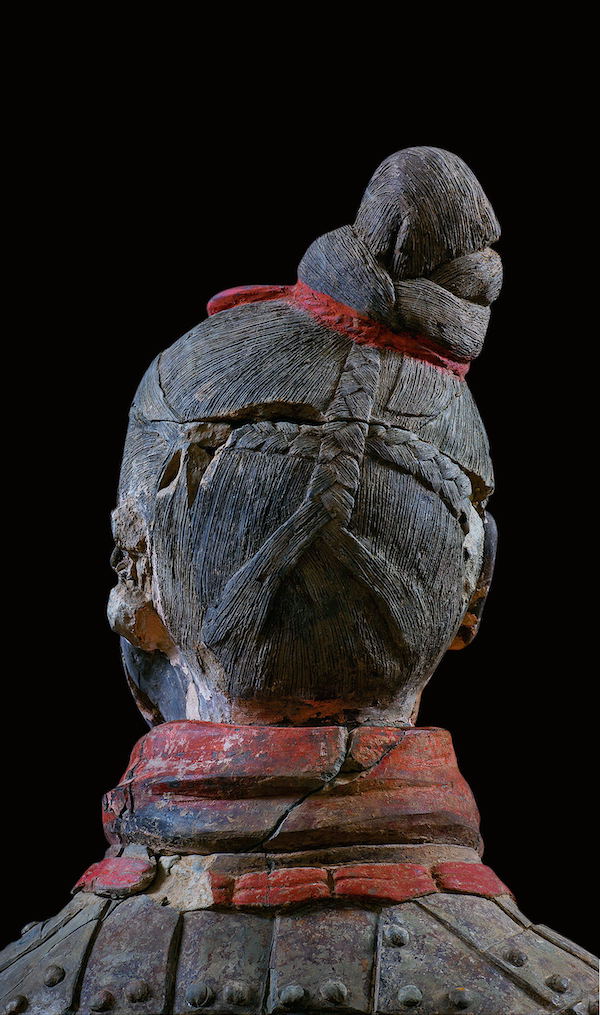 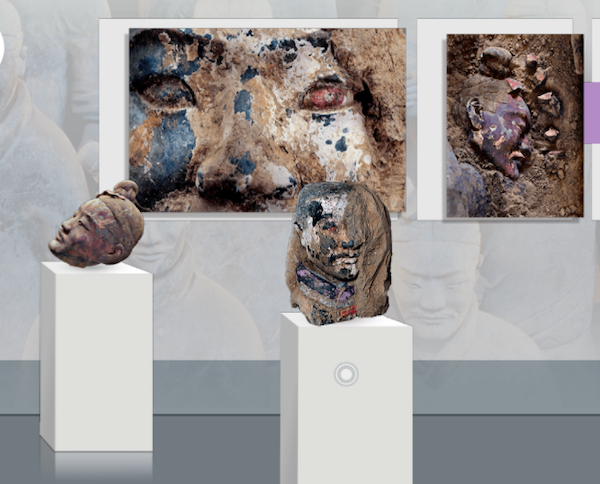 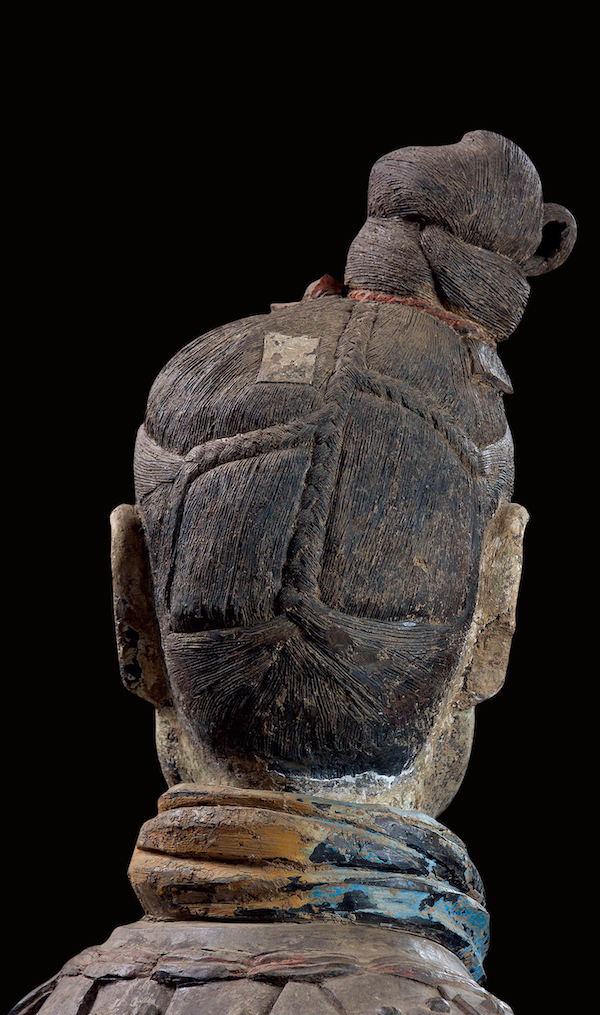 Wild belts and exquisite patterns above 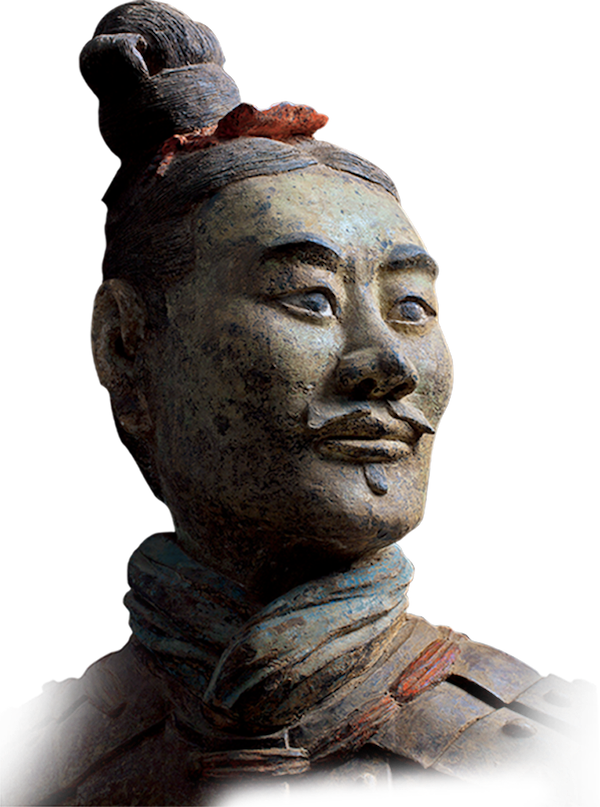