When I was a kid, I secretly painted nail polish, and you must be reprimanded by Ma Ma like this: “Don’t apply it, this thing is toxic.”

For the little fairy who loves beauty, it is impossible not to apply nail polish. but 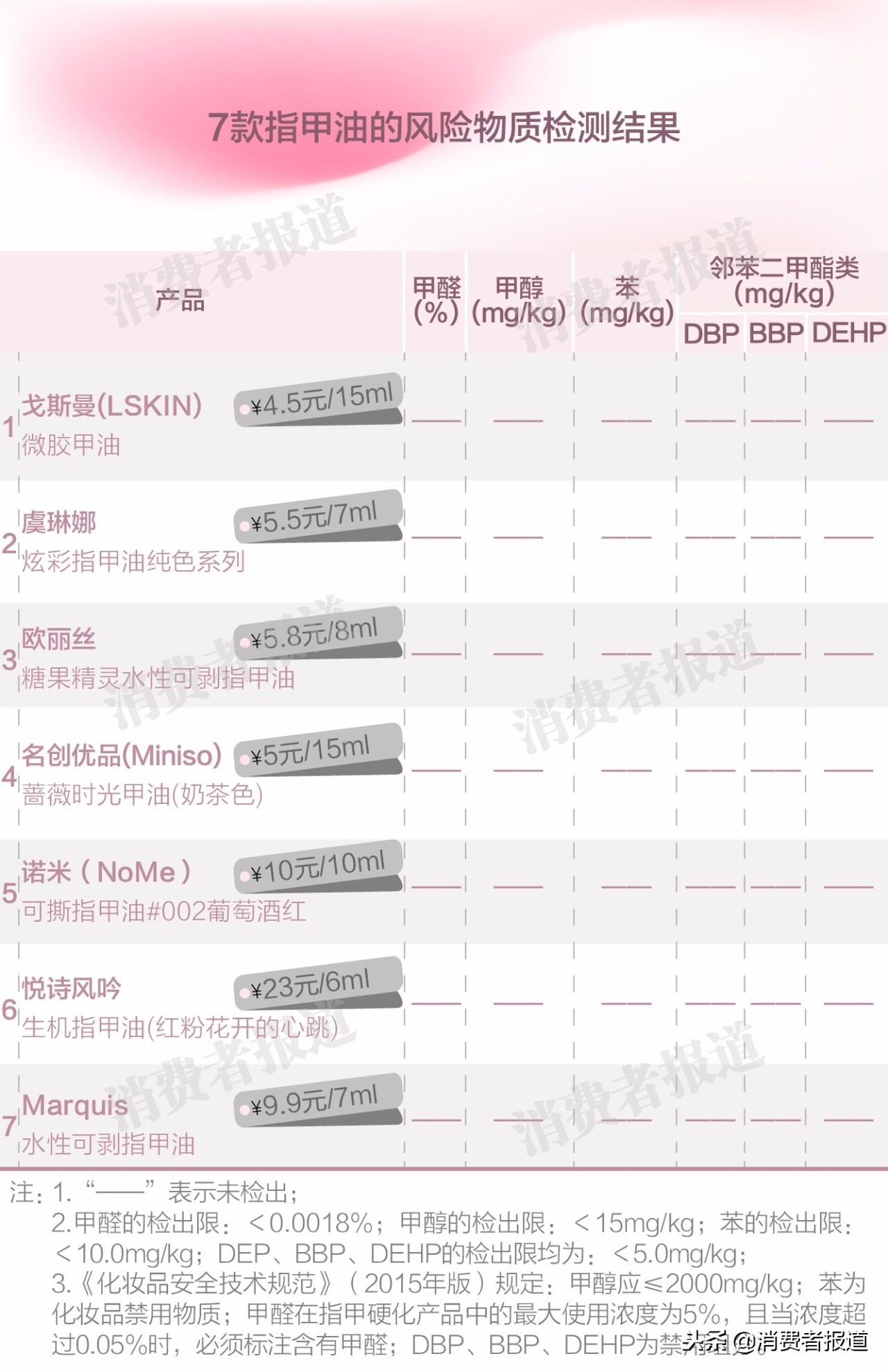 The teachings are like thunder. I had to enjoy the pleasure of applying nail polish while sneaking and comforting my occasional painting.

So, is nail polish really “flood beasts” as people recognize?

In October 2018, the long -term evaluation of 7 cheap nail polish was evaluated, let’s take a look together!

All 7 nail polish passed safely and did not detect 6 risk substances.

7 types of nail polish do not detect methanol

It can be used to make the film quickly, and it can be torn off in the case of water. Its smell is relatively friendly and will not smell very pungent.

Methanol is a typical organic solvent. It smells a spermatogenic taste that can cause poisoning through respiratory tract inhalation, skin intake, esophageal intake, etc., dizziness, headache and even coma. Essence

The test results show that none of the seven nail oils were detected.

No carcinogenic substances, formaldehyde and benzene

Formaldehyde, titohopine, and cytamate (DBP). Known as the “toxic three swordsman” in nail polish. They have great harm and are also “invisible killers” that have long -term harm to nail workers.

In the early days, some plasticizers or resin (such as toluene sulfonamide formaldehyde resin) were used to improve the nail oil membrane after coating, making it relatively soft and tough. But this resin releases formaldehyde, which has pungent taste, easy to stimulate the eyes, and cause allergic dermatitis.

Penzide is not uncommon in nail polish. It is one of the world’s recognized carcinogens and is banned from being added to cosmetics. People who often come into contact with benzene are prone to allergic symptoms such as dermatitis and eczema; in addition, it is also prone to hurting the hematopoietic system.

They can reduce the brittleness of nail polish and avoid cracking. However, they may interfere with endocrine, cause malformations of reproductive system, and have the effects of carcinogenic, teratogenic, and mutations.

At present, the “Specifications” in my country are prohibited to add these three to cosmetics.

None of the seven cheap nail oils were not detected, five risk substances: formaldehyde, benzene, DBP, BBP, and DEHP.

How to choose and use nail polish?

2. When using organic solvents nail polish, it is necessary to avoid contact with children in the ventilation environment.

4. Be careful when applying nail polish to avoid contact with the skin of nails, so as not to cause contact or allergic dermatitis.