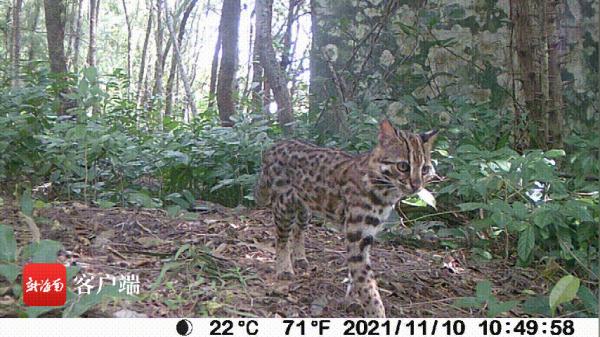 In the field of view of the infrared camera 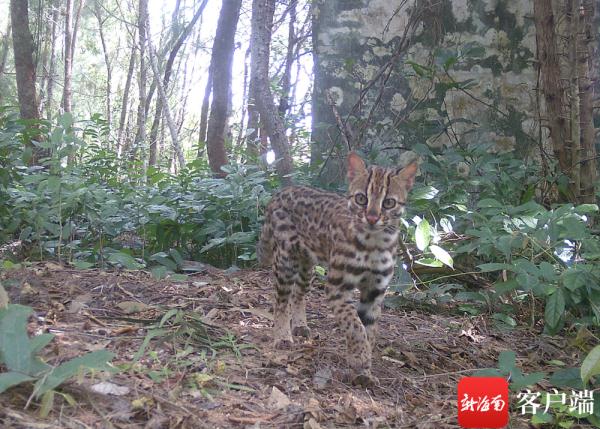 It gently walked over

Jump into the bush 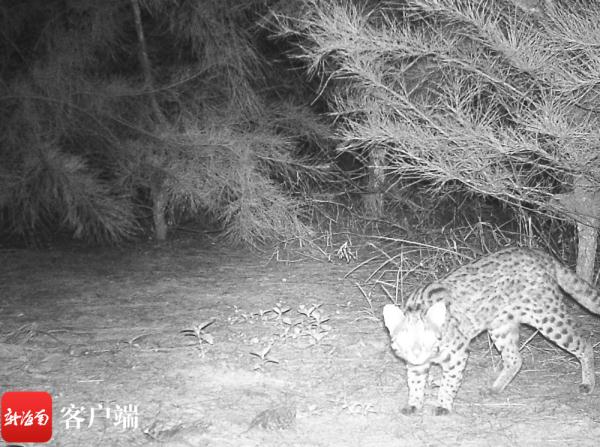 This is the Research Institute of Haikou 畓榃 Wetland

Place the picture under the camera

It is noteworthy that

The point in this monitoring

Straight distance is less than 500 meters

It is also the first time in Hainan to find a leopard cat population in the city.

It can be seen in the monitoring video provided by the Haikou Wetland Research Institute. At 10:43 am on November 10, 2021, the leopard’s figure passed from the camera, only 2 seconds. Soon, 10:50, Leopard cat returned to the camera, this time it stood before the lens, and observed 10 seconds before walking away. At 18:53 on December 16, the infrared camera also monitored the appearance of Leopard Cat.

Leopard cat is also known as “wild cat” or “mountain cat”, the difference between with the cat is that the body is large, the patterns are mainly composed of spots, mainly in all kinds of rats, for controlling the mouse. In 2021, the “National Key Protection Wildlife Directory” was enacted in 2021, Leopard cat upgrades from “three animals” to national secondary focus protection wildlife. There are only two kinds of cats in Hainan: cloud leopards and leopard cats, because the cloud leopard has not visible in Hainan, Leopard cat has become the main representative of Hainan Food. Introduction to the “Hainan Landsia Vertebrae Search”, edited by Hainan Normal University College of Life Science, Leopard cat in Zhangzhou, Wanning, London, Oriental, Baisha, etc. , The five-finger mountain and other forest areas are distributed.

Leopard cat is not only widely distributed, but also adapts to a variety of habitats from forests to wetlands, from countryside to towns. “In recent years, we found that Leopard cat feces and traces were found near Haikou, sometimes very close to human activities.” Lu Gang, director of Haikou Hai Wetland Research Institute, in Wuyuan River Wetland Public Welfare Protection Project With the support, the Haikou 畓榃 Wetland Institute has begun in September 2021, 9 infrared cameras in Haikou Wuyuanhe National Wetland Park launched a beast monitoring.

“We have frequently monitored the traces of Leopard cat activities in the Wuxi River full-stream. This shows that there is a leopard cat population living in the Wuyuan River area.” Luo said that leopard cat is widely distributed, adaptable, in the suburbs of Haikou Monitoring Leopard is unexpected, but I didn’t expect to discover the trail of leopard cat in the place near the center. 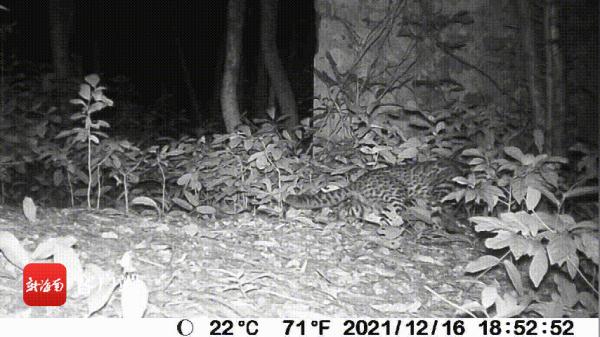 Why does Leopard cat appear in the city? “Small animals such as Leopard cats are not demanding requirements, even some fragmentation of habitats can survive.” Lu Gang introduced that Haikou Wuyuan River National Wetland Park since 2017, River Ecological Governance, Wetland Protection and Repair, Wild Plant Habitter Work, etc. The star species “chestnut bee tiger is more breeding for many years. Leopard cat’s discovery shows that the animal and plant habitat of Wuxi River National Wetland Park is being effectively protected and recovered, and it is expected to provide a habitat in the city for more local wildlife.

“How to coordinate the relationship between urban development and biodiversity protection is our new topic.” Lu Gang believes that this leopard cat is monitored in the city, and people think about how to protect urban biodiversity, with ecology The continuous improvement of the environment and the gradual improvement of wildlife protection awareness, and there will be more and more wild animals in the city in the future. Lu Gang also hopes that Haikou can leave the necessary living space for local wildlife in the process of urbanization.

Leopard cat is also known as “money cat” in China

Leopard cat is also known as “money cat” in China, because his spots are very similar to China’s copper money. The body is similar to the cat, but it is even more slender and the legs are longer. The brown color tone of the South is pale brown or light yellow, and the northern graphic tone is more grateful and has a dark spot. There is spots on the body, but never condenses vertically striped. The obvious white stripe extends from the nose to both eyes, often goes to the top. The ear is sharp, the ear is black, with white spot. Two obvious black stripes extend from the inside of the corner to the ear group. The inner corner of the eyes has a white stripe, and the nose is white. The tail (approximately 40% -50% of the head body), rumored to the black tail.

Leopard cat is mainly in the mountain forest area, the suburberry and Linyuan Village. The distributed altitude can be distributed from a low altitude coastal strap to an altitude of 3,000 meters above sea level. Leopard cat’s cane is in a tree cave, earth hole, stone or stone seam. Mainly of the ground, but the ability to climb is strong, and the activities are active on the tree. Night sex, amazing activities more. Single or pair of activities. Good Tour, like a pond, the stream, the side of the stream, rice fields, etc., and foraging. Mainly in rat, squirrel, fry, rabbit, frog, lizard, snake, small bird, insect, etc. It is widely distributed in China (except for the arid zone in the north and western).