“People with good words, life must be colorful”

He Changzhu, 73, is completely immersed in the world of calligraphy. Those who are familiar with her feel that she is unusual, because her calligraphy works are written in nails.

He mother -in -law’s nails have exceeded 100 calligraphy works, and some of them were collected by Yunyang County Cultural Museum as a local non -heritage culture display. According to the local cultural department, He Changzhu is the first person in Chongqing’s nail book.

Old lady who likes to be nail art

At 7 am on December 7, mother -in -law went out on time to exercise on time, walked for 1 hour on Yunyang Binjiang Road, and bought vegetables home.

Everything was ready. Her mother -in -law walked towards the balcony, opened a window, threw hands, patted, kneading, and habitually relieved her right arm.

After the warm -up, Mother -in -law took out two thick rice paper from the wooden cabinet, and the words above were dense and orderly. The contents of the two works are the same, both of which are the excerpts of the famous book “Dream of Red Mansions”.

“These two nail books, one to the daughter, the other to the son, and the writer to commemorate.” Mother -in -law said that after the work is completed, it is packed at the edition of the book.

Mother -in -law said that in the day, in addition to going out, calligraphy has taken a lot of time, practicing for 2 hours in the morning, and 3 hours in the afternoon.

Grandpa Cheng Grandpa Cheng strongly supported by his mother -in -law obsessed with his nail book. Considering that the nail cap to practice calligraphy is easy to break, Grandpa Cheng deliberately made a few finger sets with plastic tubes, which was called Mother -in -law to bring it when doing housework.

“Sometimes the nails are broken, and I will go to the nail shop to do fake nails. Others do this for good -looking, I am to practice calligraphy.” For this reason, mother -in -law is also famous in Yunyang’s nail circle.

Mother -in -law, 73 years old, was a technical engineer of Yunyang County Radio and Television Bureau before retirement. In the past ten years, more than a thousand drafts have been practiced and hundreds of works.

Her mother -in -law believes that Chinese characters have emotions, personality, and life, especially traditional finger books and nail books, so she loves this art.

He mother -in -law’s nail book only writes only domestic classic articles, and his works have been circulated to Shanghai, Beijing, Zhejiang, Anhui, Hubei and other places, and are treasured by local enthusiasts.

What is the operation method of the nail book?

Put the rice paper flattened, put the abandoned moisturizing cream bottle as the ink box, put it in the sponge, and pour it into the ink.

Stretching out the right hand, the length of the five fingers of the fingers is different. The shape is also different.

The use of five fingernails is different

Her mother -in -law took off the fiber cloth of drying the hanger, wrapped it on the right index finger, tied the rubber band to fix it, and the fingers seemed to wear a gauze skirt. “Over the years, I have taken a lot of money to find fabrics. Curtain fabrics, lace cloth, linen, cotton cloth, stockings, and tried.” Her mother -in -law said that her fingers wrapped the tips, called cut ink, nails, nails, nails, which are nails, which are nails. The book is the most wonderful ring. Is the ink dipping well, which directly affects the aesthetics of the glyph. Dip more, soak, the words become crickets; diploma, dry, dense. If ink can’t keep up with strokes, the words will be broken.

Subsequently, Mother -in -law entered the state of attention and consolidation. The index finger was vertically vertically with the rice paper on the table, and her nails slid quickly, like dancing on paper. The lower finger and the speed of calligraphy and calligraphy change.

Her mother -in -law sent her nail books to the Guinness World Record Research Team. For various reasons, the declaration was unsuccessful.

See you like your favorite fingers, and you can score

According to the information collected by his mother -in -law, nail books appeared during the Northern Song Dynasty, which was called a dyeing book.

Her mother -in -law loves calligraphy, because of her grandfather He Ying Sheng. According to the story of the family mouth, when the grandfather He was 12 years old, he became an apprentice in a local Chinese medicine in Yunyang. Once, he accidentally lost the single price and the bookkeeping pen. long time. The boss no longer asked his mother -in -law to use his pen, but wrote with his fingers. In desperation, my grandfather practiced the craftsmanship of fingertips.

Later, his grandfather opened a medicine shop, and his mother -in -law’s father also became an apprentice since he was 12 years old. In order to keep the children’s hard work and difficult survival, my grandfather strictly requested the practice of nail books and requested to book accounts in this way. In the influence of the family, his mother -in -law had broadcast the seeds of nail books in her heart since childhood.

In 1962, Mr. Long Qian, born in Yun’an Town, Yunyang, went home to visit relatives. Long Qian was the curator of the Chinese History Museum. Mr. Long Qian gave some of his works to his hometown, and Yunyang Middle School won a pointed book “The Song of the Water”. When organizing the school students to visit and study, the work was “strictly prohibited to touch.”

Mother -in -law said that after seeing the work of “The Song of the Water”, she was stunned and determined to learn from Mr. Long Qian. At that time, Mr. Shi Zicheng, a master of calligraphy taught at Yunyang Middle School, found a way to make her and Mr. Long Qian meet. “After reading my nail book, Mr. Long was very happy and said that my words were very found. I suggest that I try to wrap a layer of cloth ink on my fingers and encourage me to persevere.” Hedo He said, since then, whenever he saw it, he should see it when he saw it when you saw it. If she likes words, she uses her fingers to compare in the air or write on her limbs. Over time, learning to write nail books has become a lifelong pursuit. 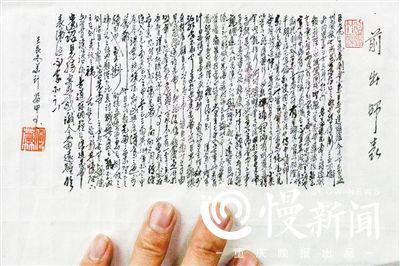 After retiring, Hero, who has been brewing for many years, created a set of “Cross -word”. She said that according to her method, you can learn in 5 minutes, 10 hours (half an hour a day, practice for 20 days in a row) to master hard pen calligraphy.

The key to the word is: the horizontal and slanted stroke, the angle is consistent with the circuit, the oblique, straight, pull, press, return, location, distance, length, etc., referred to as the cross method.

According to the characteristics of Chinese characters as block characters, Mother -in -law summarized, first practicing from the overall practice and setting the characters smoothly. If you want to change the habit of writing the brushwork, you can write the horizontal strokes, the left low and right, and keep the slope consistent. You can also straighten the vertical pen. If you want to add a spirit to the word, you can press slightly when you start with the pen.

Mother -in -law suggested that if you want to practice hard pen calligraphy, it is best to practice 3 to 5 words every day. It is best to persist for 1 to 3 months. When the word is practiced in place, you can perform sentence exercises.

It is understood that her mother -in -law also wrote the exercise book “Getting started”, which was loved by local enthusiasts.

“People with good words must be colorful. People who don’t forget the national traditions and family tradition must be full of feelings, and their feelings are rich.” He said that there are many ways to promote Chinese character culture. The craftsmanship contributes to society.