Whenever they exercise, drive, stay up late, and work overtime, many people choose to drink the effects of anti -fatigue and other functions as a functional drink, wake up the brain to reflect the energy.

However, there are many functional beverage brands and the same advertising words. Which one is more effective and healthy? This is the issue that consumers are particularly concerned.

2. From the perspective of the total sugar content of each bottle,

Five of the 5 models reaches more than 30g/bottle, drinking a bottle will exceed the reasonable “control line” of 25G recommended by the dietary guide.

The taste and smell are good. The comprehensive score reaches 8.1, which is the most popular volunteer;

The taste and smell are evaluated as “weird”, and the comprehensive score is backward, with only 3.7 and 4.3, respectively.

At the same time, sodium benzoate and potassium pear acid were detected;

Waiting for 5 models contains sweeteners. Although the amount of detection meets the standards, in view of the purpose of drinking functional beverages to supplement energy and resist fatigue, this magazine recommends that consumers try to choose drinks with less food additives as much as possible.

The highest difference between anti -fatigue components is 25 times

At present, there are many anti -fatigue food additives, and one of the more common components is taurine. Telonic acid is also known as beef gallic acid. It is an essential non -protein amino acid for the human body. About 70%of taurine in the human body needs to be taken from food.

The “GB14880-2012 Food Nutrition Reinforcement Standards” stipulates that the amount of taurine in functional beverages is ≤60mg/100g (ML), but health food beverages are not subject to this restriction.

The test results show that the taurine content of 12 functional beverages is between 40mg/ml ~ 1000mg/ml, of which

Both war horses and Japan are 40mg/100ml

It is worth noting that because the health care is a health food, its taurine content is higher than that of the “GB14880-2012 Food Nutritional Repertory Standards”, which is normal.

Taking the health care as an example, the taurine that can be intake per bottle (150ml) is 1500mg. Is there an excess risk for consumers?

Medical data shows that for adults, the daily maximum intake of taurine is 6000mg (6g), so

The tunnels tested at each bottle (tank) provided by the 12 functional beverages are within the scope of safety.

“Functional drinks add sugar, in addition to providing energy, there is also a taste problem. In order to reconcile the mouth, a certain amount of sugar will be used.” Some food experts said.

However, in addition to overweight and obesity, the intake of too much sugar may increase the risk of chronic diseases such as dental caries, diabetes, hypertension, and heart disease.

With reference to the definition of “high sugar food” in the Hong Kong Food Safety Center in China, the sugar content of more than 15g per 100g (ml) food is called “high sugar”.

According to the suggestion of the “Chinese Resident Dietary Guide (2013 Edition)”, controlling the intake of sugar is controlled, the daily intake does not exceed 50g, it is best to control below about 25g.

It is worth noting,

The total sugar content is as high as 15.2g/100ml, which is the highest of all functional beverages, and at the same time meets the standard of “high sugar food”.

However, because consumers’ consumer consumer is basically standard, the sugar that can be intake in 12 functional drinks is different.

The total sugar available for 12 functional beverages is 12.7g/bottle ~ 66.6g/bottle, of which

Waiting for 5 models to reach more than 30g/bottle, drinking a bottle will exceed a reasonable “control line” of 25G per day.

In addition, Zhongwo has a sugar content of 66.6g/bottle. Drinking a bottle will exceed the daily maximum limit (50g) recommended by the “Chinese Resident Dietary Guide (2013 Edition)”.

The taste of functional beverages is mainly adjusted by adding sugar and sweeteners to cover up the bitter taste of B vitamins in it; the purpose of adding flavors is to prepare a soft smell to avoid irritation. 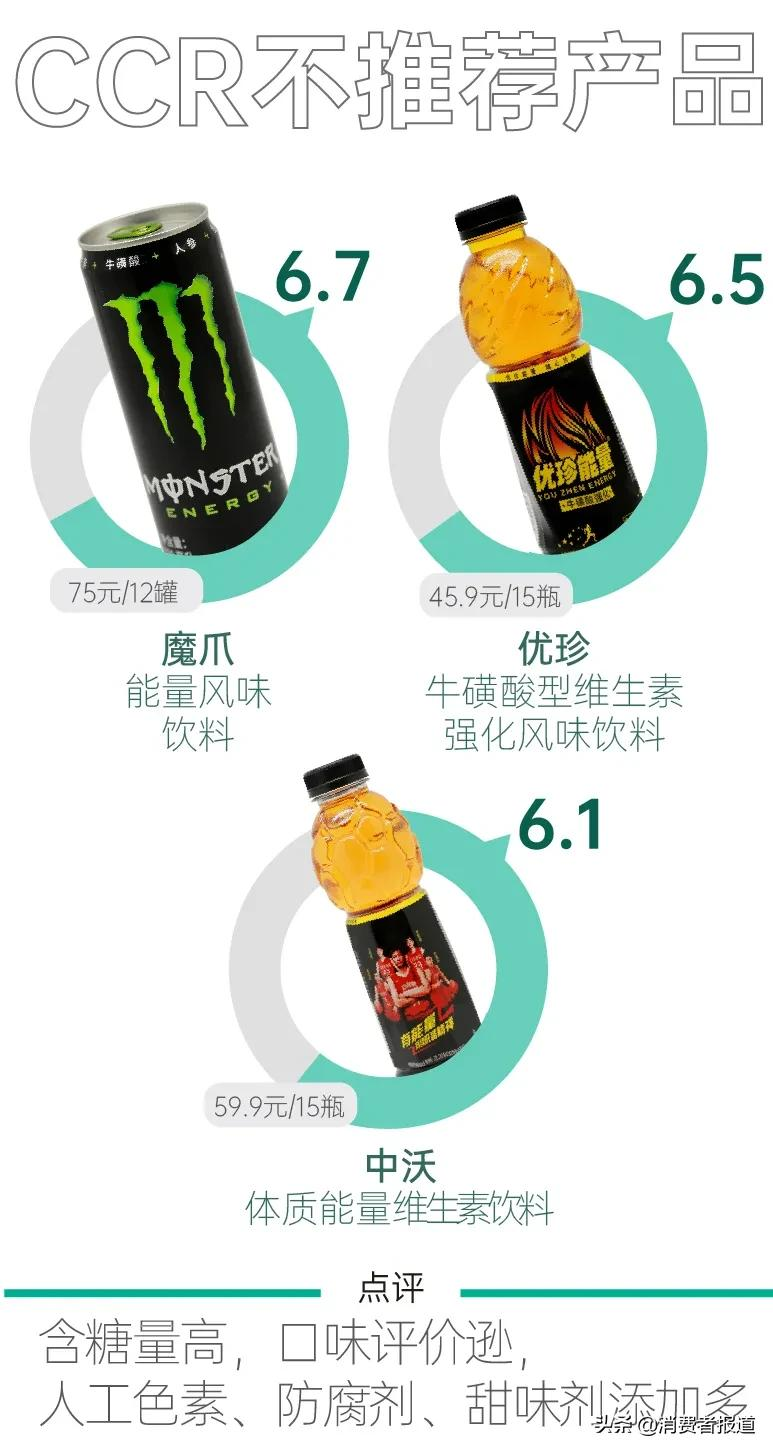 Among the 12 functional drinks for this inspection, all the flavors such as sugar and flavors were added. In order to evaluate their tastes, this magazine specially invited 10 volunteers to conduct subjective blind evaluation experiments.

The taste and smell are good, respectively 4.0 and 4.1, respectively, and the comprehensive score reaches 8.1. It belongs to the level of “very much” and is the most popular volunteer.

Some volunteers evaluate Dongpeng with a faint fruity aroma and healthy flavor, and the taste is slightly sweeter, but the overall sweet and sour feeling is still more coordinated.

Both taste and odor performance, comprehensive scores are 5.7, 5.3, and 4.3, which belong to the level of “general favorite”.

Some volunteers believe that Lehu has a flavor and delicate taste and the taste is sweeter; the smell of the magic claws is pungent, not real, and the entrance is acidic; black ore has wind oil and fine taste, pungent, and ginseng flavor at the entrance, and the aftertaste is bitter.

The taste and odor scores are only 1.6 and 2.1, respectively, and the comprehensive score is only 3.7, which belongs to the level of “don’t like”. Most volunteers spit out the strong potion, sour and bitter taste, and it is difficult to say.

Wait for 9 models to detect sodium benzoate or potassium sorbate, and the content is 0.09g/kg ~ 0.3g/kg, of which

From the perspective of preservative additions and types, the detection results of the above 9 functional drinks meet the provisions of the “GB2760-2014 Food Additives”.

This test found that the war horse, Red Bull, Dongpeng, and Black Kurite added sodium benzoate, and the potassium pear acid is added with the Chinese, Youzhen and Lili health care.

7 models such as Lehu and Leopard Faqi detected artificial pigments

Public information shows that synthetic pigment refers to the organic pigment made by artificial chemical synthesis, mainly based on aniline separated from coal tar.

From the perspective of industry data and functional beverages, the two artificial pigments of lemon yellow and temptation red are very common. However, their additions cannot play a function of increasing food nutrition. Therefore, the lower the content, the better.

“GB2760-2014 Food Additives Use Standards” stipulates that the limited edition of lemon yellow and tempting red in special use drinks and flavor drinks is ≤0.1g/kg.

Waiting for the five models to be nominated in the ingredient table, the temptation red pigment is not detected.

The technicians responsible for this test said that it may be because the temptation in these beverages is a small amount of small amounts, which is lower than the detection limit of methods and instruments. Therefore, the above situation occurs.

The above five functional drinks are not added with the above -mentioned artificial pigment.

This magazine believes that although the addition of artificial pigments can make the appearance of the beverage look more vivid and seductive, it seems not necessary to add artificial pigment from the perspective of health and nutrition. It is recommended that consumers choose to choose without adding or less added Pigment drinks.

Among foods such as beverages, the most commonly used artificial sweeteners are Ansai Mi and trichlorotonose, because they have high sweetness, no heat and no dental caries, so they are widely added.

The “GB2760-2014 Food Additives Use Standards” stipulates that the use limited editions of Ansisi and tricanlose sucrose in functional beverages are ≤0.3g/kg and ≤0.25g/kg, respectively.

Judging from the above detection results, the additions of Ansisi or trichlorite in the five functional beverages meet the provisions of the “GB2760-2014 Food Additives Use Standard”.

However, some nutrition researchers believe that in fact, sweeteners are fooling our brains and digestive systems. Its sweetness makes the human body feel foods containing sugar, but the blood sugar does not rise but still decreases. The human body will feel insufficient sugar, which will enhance appetite reflectively. The final result may be to promote the occurrence of obesity.

In 2019, a report from the American Diabetes Association (ADA) prompts that people who often use artificial sweeteners will also increase the risk of type 2 diabetes, and the increase is similar to those who directly drink sweet drinks.

[Special Statement]: The test results in this report and mentioning the brand are only responsible for test samples, which does not represent the quality status of the same batch or other models of products.

At the same time, sodium benzoate and potassium pear acid were detected;

It is worth noting,