The 730 conference point directly to the technology of “stuck neck”. For my country, the chip is indeed a stuck neck, and the most stuck in the chip industry chain is wafer manufacturing, and the equipment and materials are the most critical factor. As long as the equipment and materials are solved, the rest is the problem of craftsmanship. You can always overcome it as long as you take the time to test it.

So today, I will give you a list of the core list of semiconductor materials, which basically belongs to a net.

1. The chip manufacturing process, in addition to being subject to the equipment, is also subject to materials

In the previous article

Equipment and materials are also a key direction for domestic replacement.

2. The composition of chip manufacturing materials

From the perspective of the semiconductor chip manufacturing process, all processes are carried out on the silicon wafer substrate. The specific process process includes: 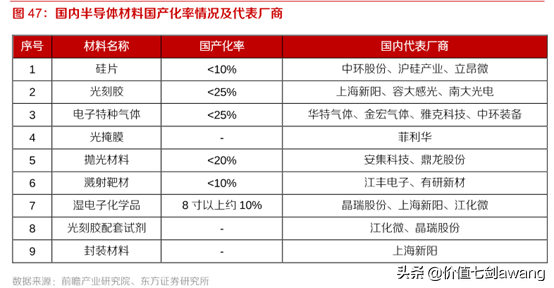 The above steps form a cycle.

The materials made of wafer include:

From the perspective of the market composition of various materials:

The highest proportion is silicon tablets, accounting for 37%, followed by light mask and electronic specialty, accounting for 13%. Polishing materials and wet chemicals currently account for 7%. The proportion of photoc jiches is about 5%, and the target is less than 3%.

At present, the global silicon wafer market size is $ 11.2 billion, with a mask and electronic specialty of more than $ 4 billion, and is mainly led by overseas companies such as Japan.

In contrast, domestic is currently relatively backward, but under the demand for domestic alternatives, the industrial chain ecosystem has also emerged in multiple segmented leaders.

Among them, PCB has the lowest requirements and the fastest domestic replacement progress. For example, wet membrane photoresal glue has achieved a localization rate of 46%.

The core business includes the relatively highest -threshold semiconductor photoscience, and customers include SMIC and San’an Optoelectronics. In the first half of 2020, Tongcheng New Materials cut into the lithography adhesive business by acquiring some of the equity of Beijing Kehua (currently holding a total of 42.3%).

In the research and development of high -end photochemicals for integrated circuit manufacturing, customers include SMIC and Yangtze River Storage. 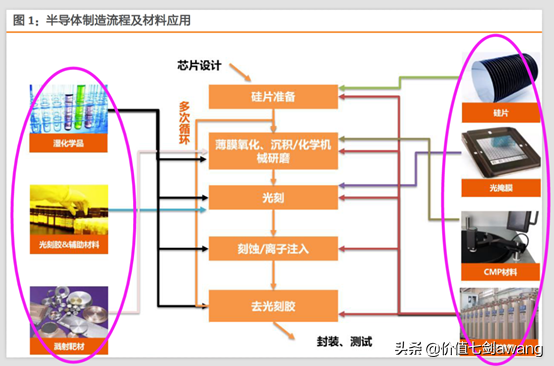 The formal establishment of the “Key Technology Development Projects of Lights and Supporting Materials” and the “ARF Lights Equipment Development and Industrialization Project” is still gapd away from SMIC’s requirements.

KRF (248nm deep ultraviolet) Optical glue is completed, and the technical level is relatively backward. Customers include Yangjie Technology and Crystal Optoelectronics, but it takes time to meet the requirements of SMIC.

The target is an indispensable raw material for the sputtering process for preparing electronic film materials.

In the downstream applications of domestic targets, the tablet is displayed the most, accounting for nearly half, and less than 10%of the semiconductor. Specifically:

The company’s technology has achieved a certain breakthrough, and customers include the top international chip manufacturers such as SMIC and TSMC.

Have a new material

The company’s customers include core manufacturers such as SMIC and Northern Huachuang.

The company’s level is relatively backward, and the products are mainly used in the field of flat display, and customers include BOE and so on. 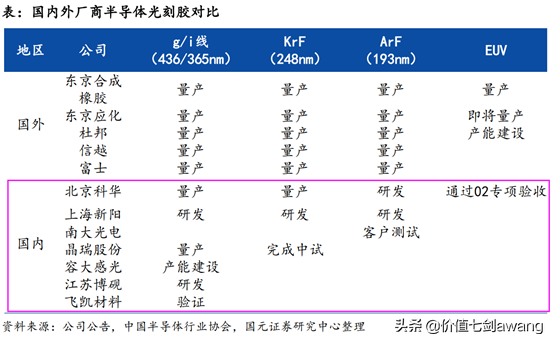 The core business of the company is polishing liquid (90 % of the proportion) and photoresal removal agent, as well as

The company’s customers include the core manufacturers of chip manufacturing such as SMIC, Yangtze River Storage, and TSMC. The field has gradually broken domestic monopoly, but the current revenue accounts for less than 5%.

The 12 -inch silicon wafer is the preferred material for the advanced process (such as 20nm).

The company’s customers include core manufacturers such as SMIC and TSMC.

The company’s mask version products are mainly used in the field of flat display, and there is room for improvement in the technical level.

In the semiconductor production link, chemical gases are used in the process of extension, ion injection, blending, washing, and covering the membrane.

The only gas company certified by ASML in my country.

Wet chemicals are used for etching links, and wet etching can achieve the local removal of film through chemical reactions between chemicals and film.

Although most of the wet electronic chemical companies are still in the international G2-G3 standard stage, some of the products of some leading companies have reached the international G5 standard, which effectively helps the process of domestic replacement of wet chemicals. Specifically:

, But Jiang Huai is about to have G4-G5 levels.